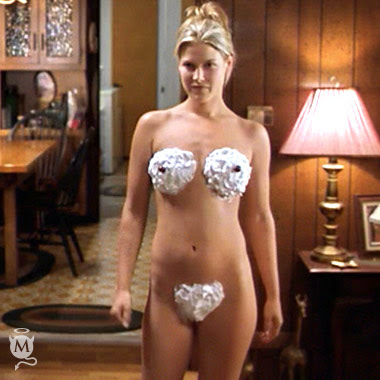 For your Sunday afternoon delight, CC provides a glimpse of the ridiculous in fashion.
It’s so trite, it’s become cliché – but that’s not stopping designers to have a bit of fun with some ingeniously placed circles...
The possible inspiration for this Spring 2009 trend?
Ali Larter, cleverly covered with whipped topping in Varsity Blues. 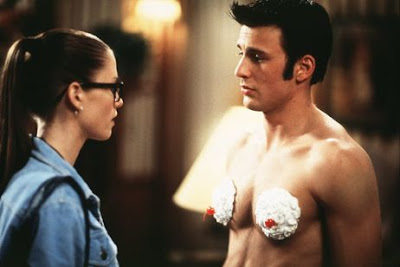 Of course, the human creampuff look has been spoofed numerous times, including in this not inoffensive scene from Not Another Teen Movie.
Not that you asked (or cared) but apparently whipped cream is too light for the kind of "hold" necessary for these shots, so it's actually shaving cream that was used on set in both films! 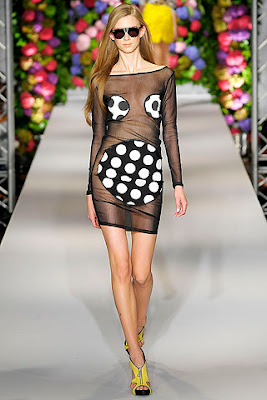 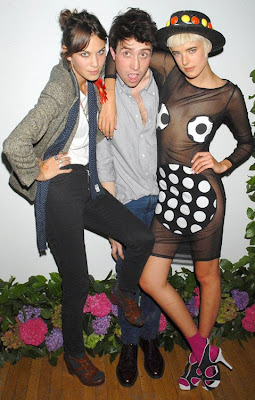 At the after-party, Agyness Deyn, who walked in the HOH show, was clearly not afraid to wear the trend off the runway!
Photo via trashionista.net. 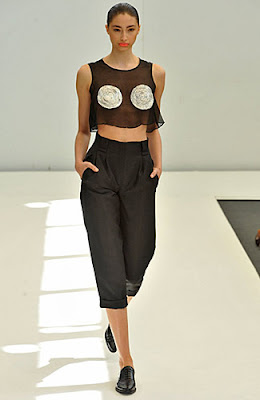 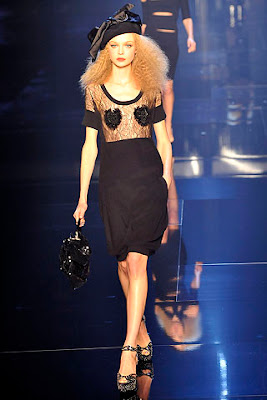 
With Halloween coming up, CC may be posting some more adventurous fashion trends . . . So brace yourselves for a wild October ride, darlings!
Posted by Couture Carrie at 11:33 AM

CC, great comparison. i will take the whipped cream over those tops any day. : ) have a great day.

Hi there-the Sonia dress is the best of the picks, but they are not my style, LOL!!

i love varsity blues! haha. reminds me of the shirts in mean girls too.

this is such a hard look to pull off. but agyness can do it

LOL
this made me laugh so hard
i love it<3

this is too funny.
although i have to admit. i've never seen that movie with the whip-creamed bikini !

fashion has a fun and playful side to it & i love how this showcases that.

Thanks for your comment on my blog! I was also a bit disappointed by Balenciaga...
You have a great blog too! Want to exchange links?

Haha this is a fun post. I think Agyness Deyn looks great.

this was hysterical and brilliant! : )

ali larter is the only person who could pull that off...

The only appropriate whipped cream outfit is the one from the Herb Alpert album cover.

with a body like deyn's what's there to be afraid of! I guess she can rock any runway look into streetstyle.

The HOH dress is really pretty, but is the kind of dress that will fit agy good only!

I loved that comparison !

This is a little bit raunchy. great Post though.

what si with the cream? i know that everybody was talking about that dress that deyn wore but... no. i think that even she can not work it... but on the other hand this model on the runway is spectacular!

adventurous indeed. Kira reckoned this is a typical 'what not to wear' number...:P I say.. why not.

aggy can actually pull that dress off pretty well! one of the VERY FEW that could... i lovee ur posts keep up the great work :D

hahaha love this Carrie. I like the house of holland dress.How cheeky is it! I'd wear it ;o)
Love how fun fashion can be,its always throwing dares out there isnt it.Think Aggy D makes the dress work.
stay fabulous darling!
x
Marian

Ha ha this has made me giggle. Those dresses do look like they were sprayed with whipped cream.

CC I almost choked on my green tea...that was too funny! I love the Not Another Teen Movie spoof of Varsity Blues. I live for Agyness and the Rykiel look. Stunning!

i love your comparison. i am not a huge fan of those tops though - in otherwise great collections. They're just a bit too much for me.

If wearing whipped cream it is very important to wear in a cold room. Happy to see no cherries on top.;-)

hahaha i loved this post, made me laugh outloud! I really dont like the whole whip cream on the private parts look... its funny, for sure but esp on agy that look is so bad!

Cool idea for a post....google Herb Albert's Tijuana Brass, "Whipped Cream & Other Delights" is another whipped cream picture that would fit nicely in your collection.

Do you know this was on the other night at 4am? I was jetlagged and this was on. Hysterical!

Interesting ....but a bit tooo much for me to handle, lol :P

i like the analogy but i so hated THAT dress

wow, i don't know how i feel about this trend! pretty funny, though... he he he!

Chloe model is awful, but Marchesa and Elie are gorgeous.
Love pink in October, it's our month don't forget to go to the doctor once per year.
Kisses
Vivi

Haha, fun post!
you would never see ME walking around in that dress Agyness Deyn is wearing :)

eek! I never thought I'd see that on your blog! By the way, I am doing a series on halloween costume ideas this week:)

hahaha this is hilarious!