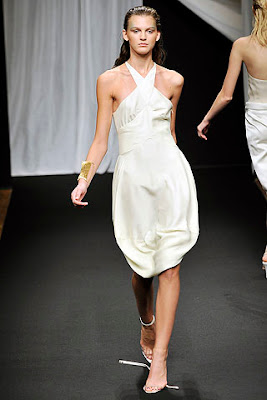 Back by popular demand, it's CC's Runway Oops!
What’s scarier than these fashion failings? Our occasional joy at witnessing such mishaps! 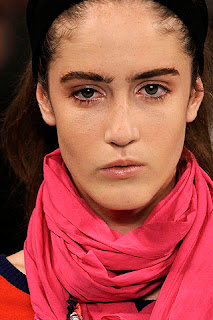 From Amanda Laine’s crazy brows (right) to broken sandals at Anne Valerie Hash (left), there were some serious atrocities on the Spring 2009 runways!
Brace yourselves, darlings, because some of these shots are horrifying! 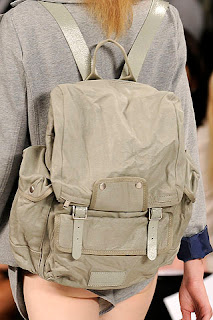 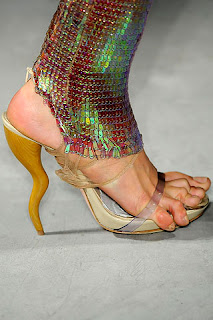 A toe or tow tries to escape at Alexander McQueen and 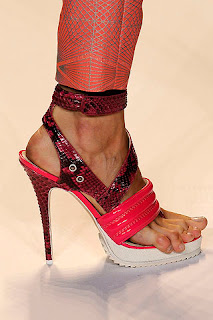 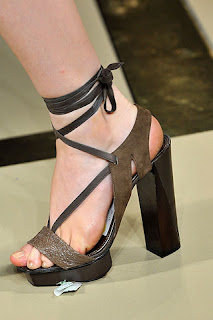 Donna Karan (it's not as bad as TP, but it's pretty close!) 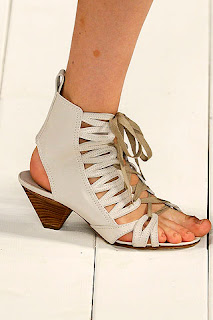 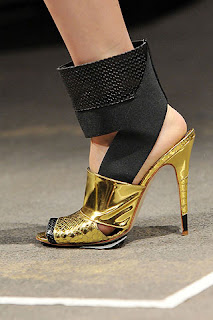 From too much toe to not enough, at Thakoon (right). 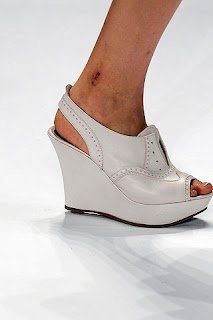 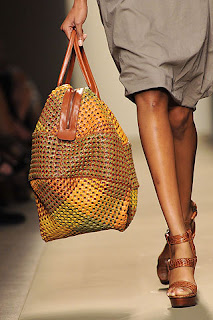 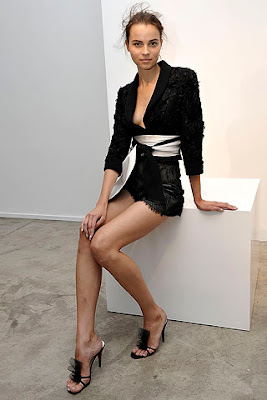 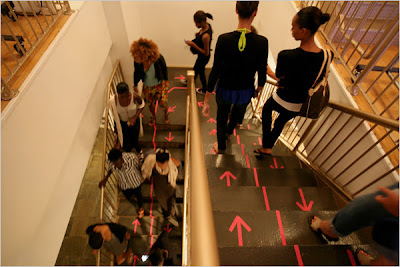 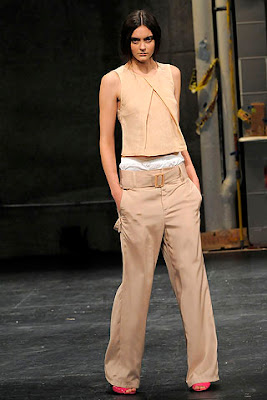 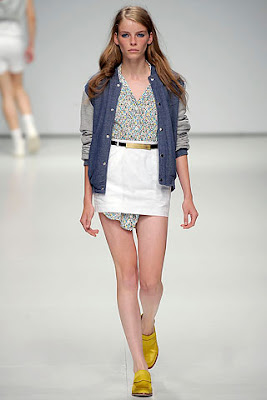 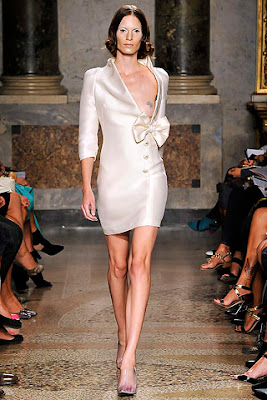 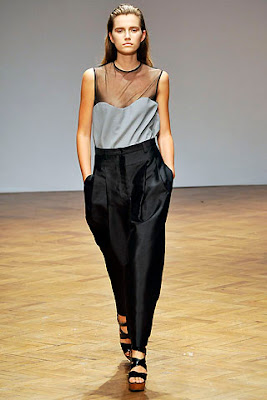 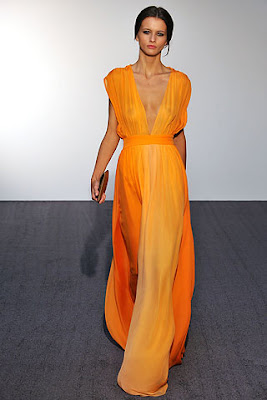 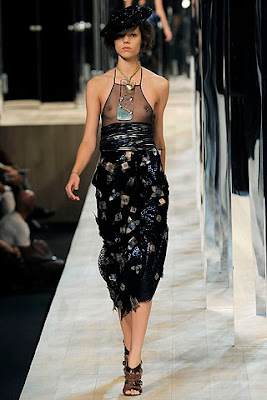 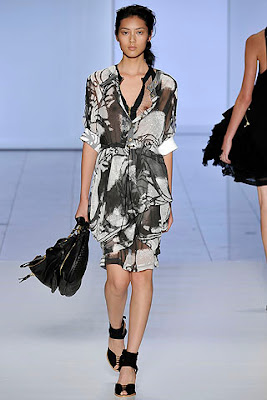 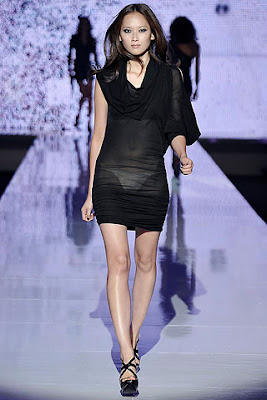 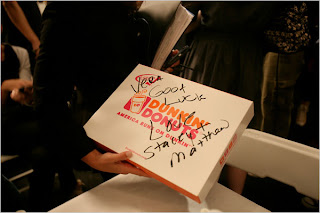 A backstage joke? CC highly doubts whether Vera or any of her models feast on donuts! Pic via nytimes.com. 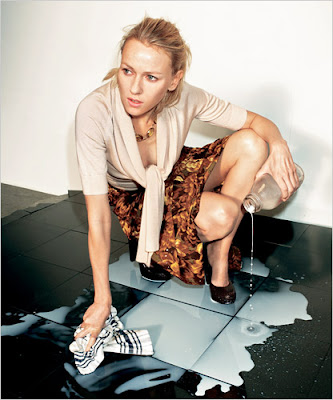 But there’s no use crying over spilled milk (or slipped nips, ill-fitting shoes, etc.), right?
Photo at right: Naomi Watts wearing Michael Kors in the New York Times Style magazine, via nytimes.com.
Posted by Couture Carrie at 11:51 AM

i understand that some fashion decisions are almost too cool for me to understand. but come on, when your toes are spilling over your shoes? that's never chic.

"No use crying over nip slips" is going to be my motto from now on.

Hehe, you're right. Some of those were pretty scary!

Okay, so it just goes to show... no one's perfect, but it's nice to have a little proof that all of those gorgeous women have at least one flaw!

But seriously, my feet hurt just looking at their battle wounds! Ouch!!

What is up with the girl with the platinum nip slip? I have never seen a nip that color.

i adore the orange halston dress. i agree with you about those hanging toes. not a pretty sight.

The toes escaping from the shoes are just horrible. Really, designers, can you not give the poor models a shoe that fits. Seriously not pretty!

CC, let me know how you do with the hair products! :) Thanks for the comment, so lovely of you to drop by and leave a little note for me. Hoping your weekend is fantastic. Mine will be rainy.. :/

I was quite horrified when I saw the toes spilling over shoes. Come on! how can they design shoes like that! Great post!

oh cc.
these are perfect for a friday.

I hope you have a FABULOUS weekend.
happy friday.

Poor toes, they look so sad!

This just shows that not everything on the rynways are hot :P

those toes, those toes! AH! so frightening!

OMG! I don't get it, they still look so "cool".. I mean, I'm sure they realize what's happening! They're not only models... they're great actresses as well!

some great pix but some ugly toes....lol

okay, those toes are grossing me out hardcore!!! They look like they're holding on for dear life!!

Very funny! It's refreshing to see less than perfect fashion images and it's good to be reminded of how much illusion there is in the fashion world :)

cc, this post is hilarious! all i can think of is michael kors, season one of project runway, saying about wendy pepper's fiasco, "i look up and i've got boobies! boobies!"
:)
cara mia

LOL i love you<3
those toes look so grotesque! ah!

You know, I really look forward to your posts. There is always plenty to oogle over!

'cept tha feeties! yech! Tough life indeed...after all that, I would at least expect to keep the shoes....right?

hahha what a great post!!! i'll be laughing for a while now... and have nightmares with those toes tonight!!!

OK not only are her toes spilling over, they are all sorts of heinous in that crooked witch-type yellow heel!

Despite the nip slips, however, that orange dress was literally my favorite look of the entire season. I might have to buy it.

haha great post ^-^ Poor models with their toes sticking out... that must hurt!

this post was hilarious! i can't believe models have to walk down the runway like that sometimes

oh my gosh... those toes are creepy XD hahaha

that picture with the stair is funny ;)

I just unearthed an old velvet bag
what do ya say?